It is with sadness we have to report that due to Beulah’s Vintage Attic now trading 100% online , our Whitchurch satellite store in now closed and all operations are now from our Salisbury store.

We thank all of our customers that supported our store at Whitchurch.

With the recent changes to the roadmap out of Covid -19, we are now once again open for browsing . We can only accommodate 6 people in store at any one time to maintain social distancing at 2.0m apart. Please check our contact page for our current opening times.

Alongside our physical store we also continue to trade via our online sales channels where we ship worldwide.

You can check out all our online sales channels via the link below…..

END_OF_DOCUMENT_TOKEN_TO_BE_REPLACED 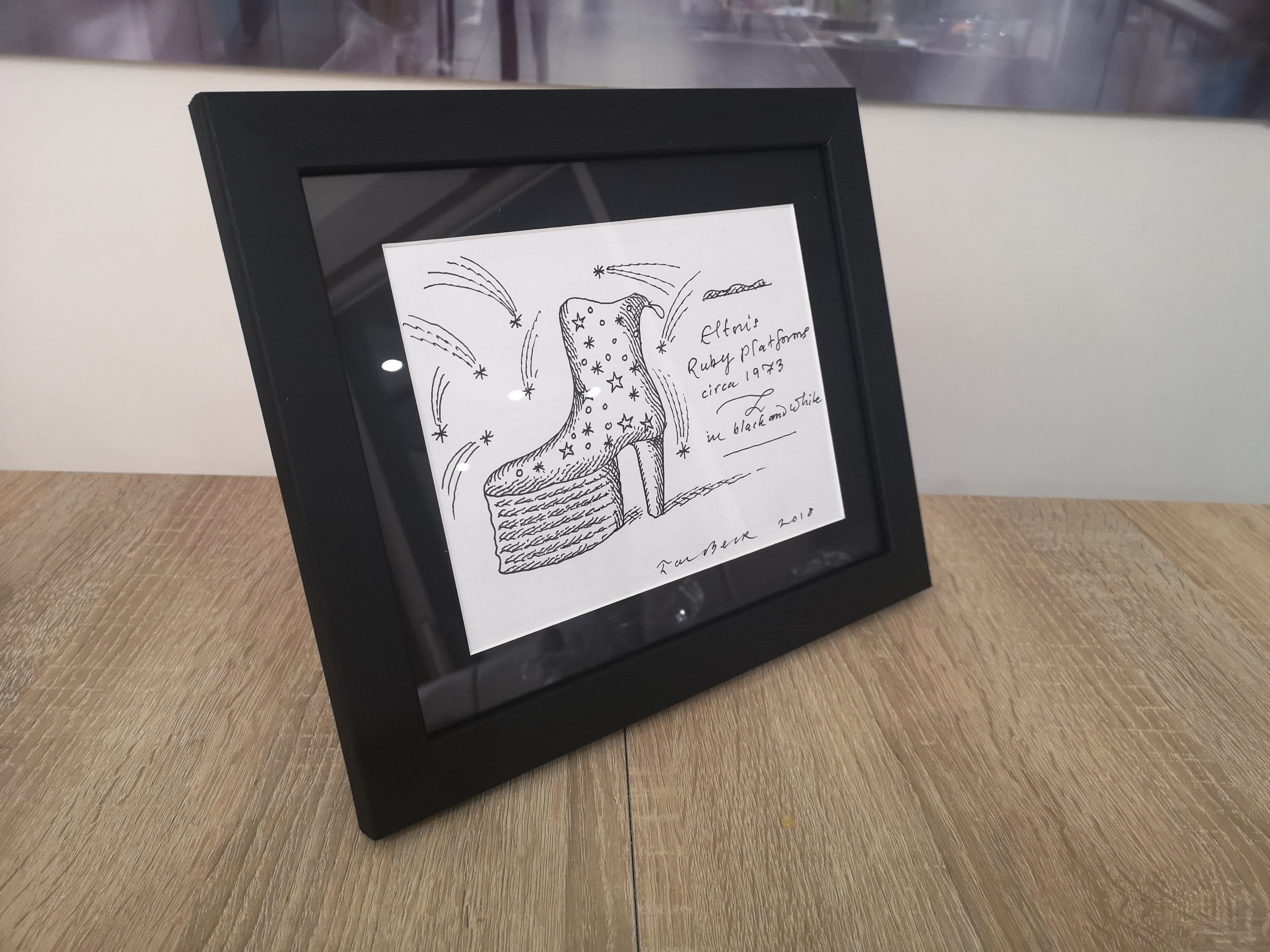 Keep an eye out December 6th 20.30 at http://www.eltonjohnstore.co.uk when this unique one off Elton related illustration by Ian Beck goes to online auction for a period of 10 days.

The illustration will be listed on eBay as a charity auction with 100% of the proceeds going to The EJAF and bidding will be open to fans around the world.

We can’t thank Ian enough for this kind gesture in support of Elton John ‘s AIDS charity to help bring an end to this terrible disease.

Please bid generously on this one off amazing item of memorabilia drawn by the man who made the front and rear covers of Goodbye Yellow Brick Road so special back in 1973 and all these years later has made the front cover of the Farewell Tour programme cover look totally amazing.

Thank you Ian for your generous gesture and time in coming to our event.

Breaking News……… we are having a Black Friday Week November 23rd – November 30th in our Salisbury store.

We understand that not everyone can get in to us on just one day so we are making a whole week of our Black Friday event.

We will be offering 10% discount across all pre-owned stock items across the shop and 5% off all new vinyl and box sets over £ 15.00. To obtain this offer you need to spend £ 20.00 or over in store in one transaction.

On our pre-owned CD’s, DVD’s and books there will be 20% off all purchases and 5% off all new CD, DVad and book purchases during this black Friday week

If you have had your eye on something now is the time to come in over our Black Friday event and snap it up.

This means discounts for everyone over this bargain busting week.

Did you know in conjunction with Beulah’s Vintage Attic we have recently moved our satellite store to Whitchurch in Hampshire which is nice and central for our regulars from Basingstoke, Newbury, Andover and Winchester.

We have close to 2000 items of vinyl, CD, cassette and memorabilia of the same quality as our main Salisbury store here for your browsing pleasure.

Some of our recently added stock below 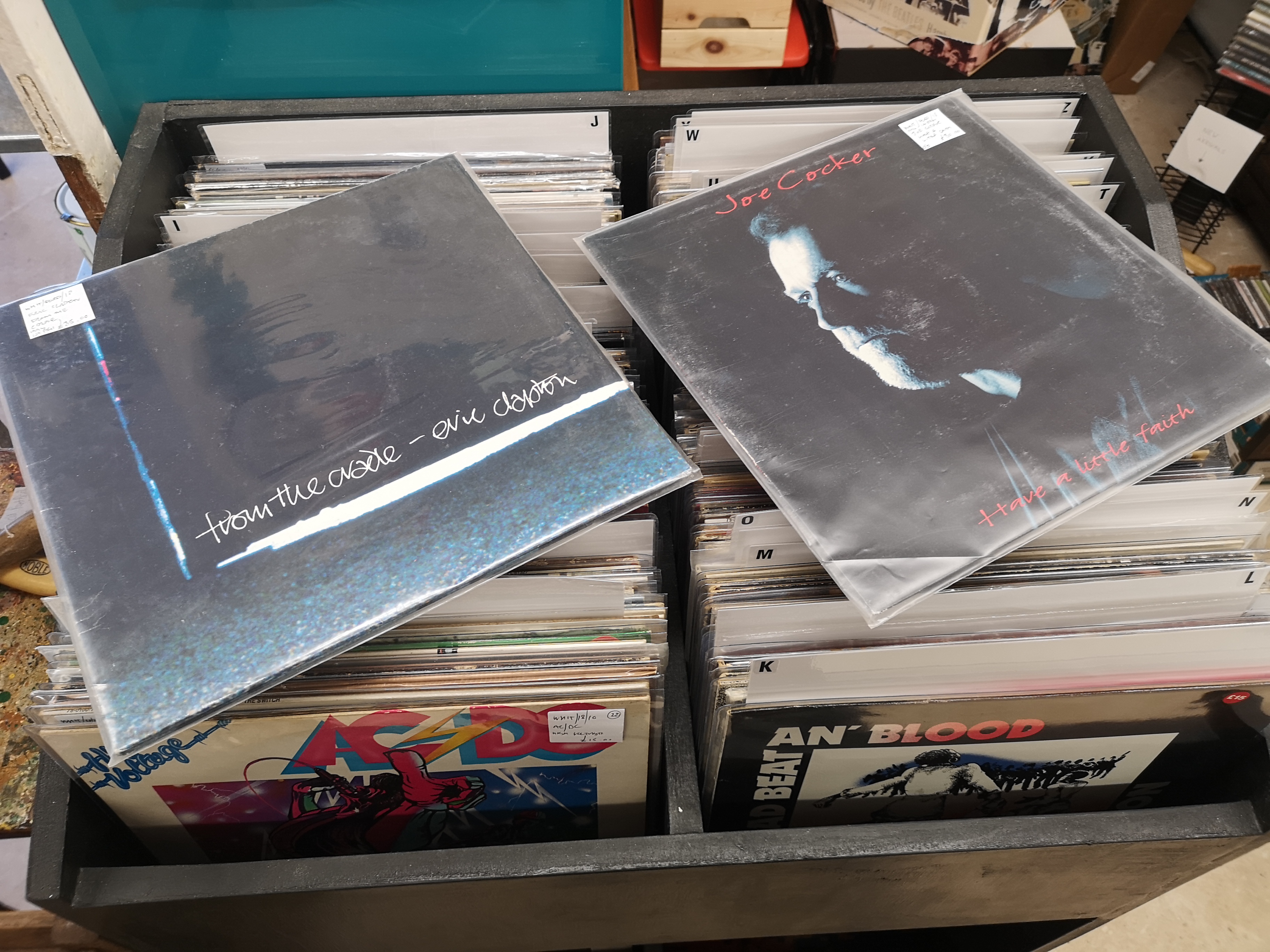 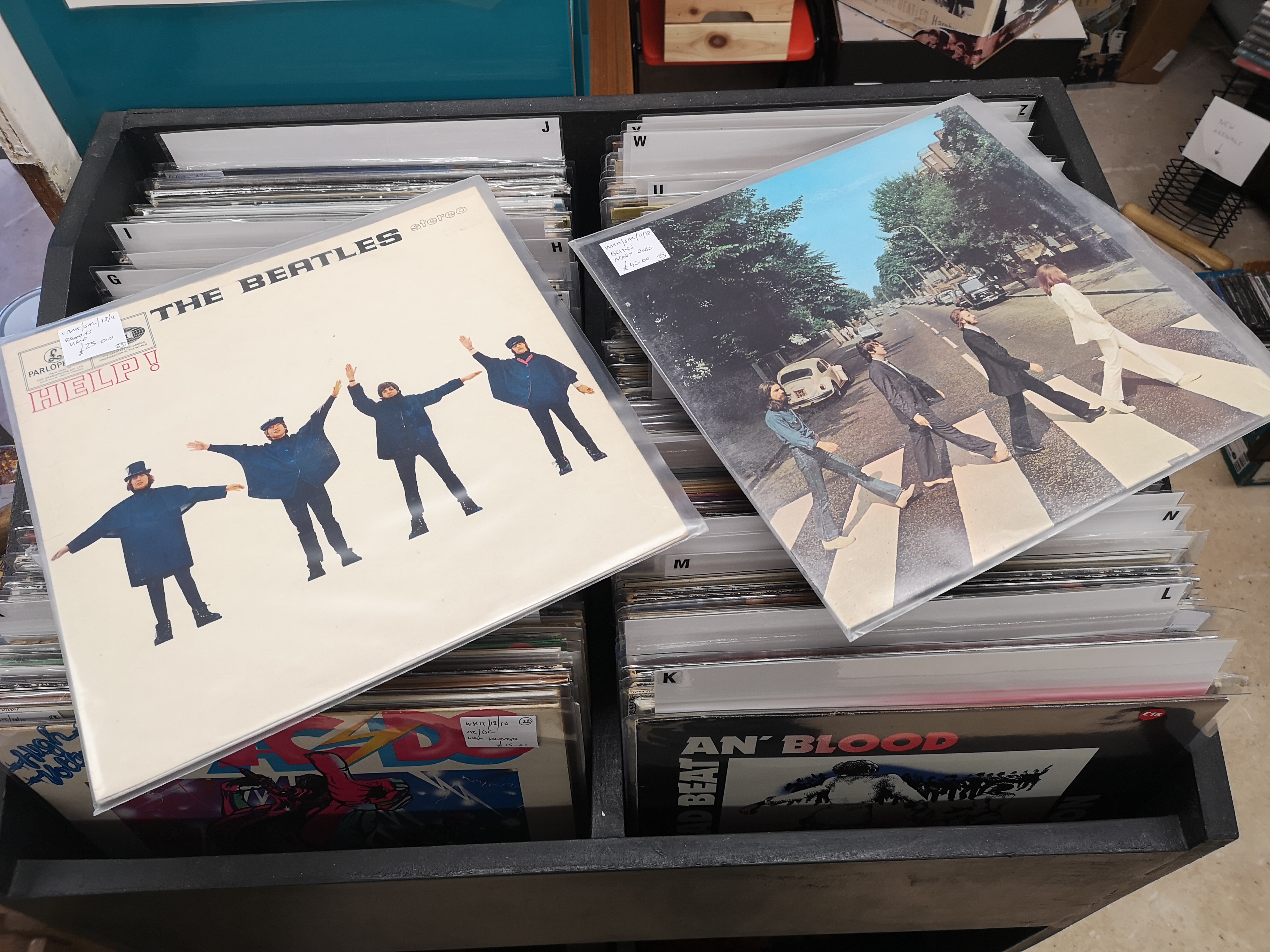 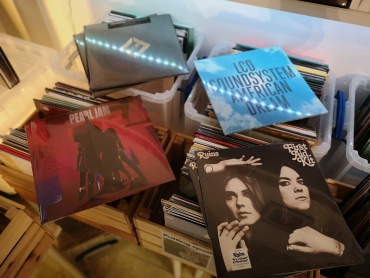 We have a great selection of new vinyl best sellers just hit the crates at £ 13.99 just in time for Christmas.

Some of the titles are shown above but call in store for a browse to check out all the titles.

Be quick as we have limited stocks and already they are selling fast.

We are celebrating that very important day of 12th August 1877 with a great offer…. read on. 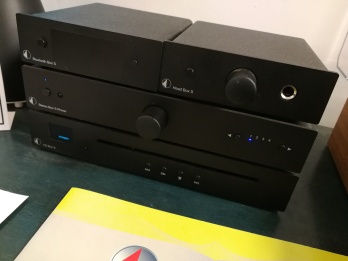 So this day in 1877 Thomas Edison launched his invention to play recorded music. The early record player was born.

And to celebrate we have a one off offer to the first taker from our Cross Keys Audio division.

We currently have a Pro-Ject Debut Carbon turntable in black, Pro-Ject Box S Amp and Pro-Ject Box 5 pair of speakers and cables in stock and ready to take away for the price of £ 882.00.

We can’t discount on the price but we can offer the person that walks in and takes it away a £ 50 gift voucher to spend in store on records at the time of purchase or for up to 12 months after.

Don’t procrastinate this is a great offer and beats anything currently available from our online competitors.

Check out our events page.

We are pleased to bring you our latest free live music night at Cross Keys Arcade, Salisbury.

Friday release day is nearly upon us again and we bring you a good selection of the days new music. 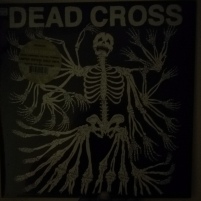 American hardcore punk and heavy metal supergroup consisting of  Dave Lombardo (ex-SLAYER, SUICIDAL TENDENCIES, MISFITS) and singer Mike Patton (FAITH NO MORE
bring us their debut album which as you can imagine is not for the faint hearted. It comes in two vinyl formats one pressed on gold vinyl and the other in clear/ red/black  swirl. Both come with a glow in the dark cover as does the CD which was designed by Eric Livingston. The album was produced by Ross Robinson, who has previously workedwith KORN, DEFTONES, SEPULTURA and LIMP BIZKIT, among others

This whole album has fine form for lovers of this hardcore genre and we have available in all formats. To read more click here 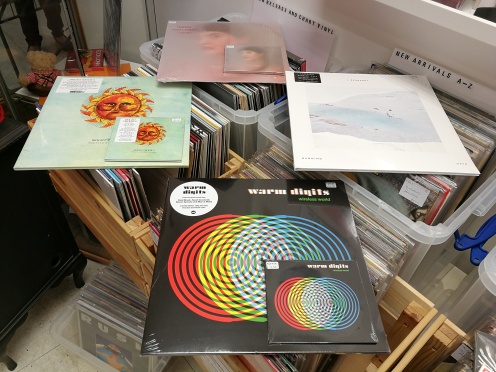 Continuing our hunt for some of the best music coming out of America this is Seattle based Briana’s third  album.

Briana’s music is ambient and experimental and she sings about emotional struggles.

One of her strongest assets is her immaculate vocal style, reminiscent of Enya in her holding one-word notes over several beats until the fade.

This is going to be on our play list over the coming week so you can check it out.

This is the debut album from by Belgian pop multi-instrumentalist J. Bernardt.

Running Days, covers a spectrum of R&B, soul and hip-hop in a similar fashion to that of D’Angelo or Gorillaz. In a press release Bernardt  shared a bit about what inspired the new material: “I still love the old-school ‘60s sound we created in the band—but for this project I began to think about what I’d play at a house party.

We are stocking this on vinyl and you can hear it in store as it’s going to be on our daily playlist over the week ahead.

Warm Digits is the krautophonic blizzard-wave duo of Andrew Hodson and Steve Jefferis, based either side of the Pennines in Newcastle-upon-Tyne and Manchester.

Wireless World is their second album. Warm Digits make a semi-improvised brew of metronomic rhythms, snowstorm guitar and radiophonic electronics, dual-laptop electro, swathes of no-wave guitar and frantic free jazz drumming, taking their cue from the hypnotic repetition of Neu!, the textural overload of My Bloody Valentine, the glacial otherworldliness of Emeralds, and the sensuous modernity of cosmic disco; there are hints in the mix too of Eno, Giorgio Moroder and Holy Fuck.

We are stocking this in both vinyl and CD formats.

Other highlights……….. Bright Pheobus, songs by Lal and Mike Waterston. Re-issue of this long out of print folk rock masterpiece.

Soul Of A Nation……… Afro Centric Visions in The Age of Black Power. Underground Jazz, Street Funk and the roots of Rap 1968-1979. This is going to be one not to be missed. We are stocking on vinyl and CD.

Notable re-issues this week on vinyl from The Clash, The Manic Street Preachers and Cypress Hill.

On CD we have a series of Limited Edition 24 bit remasters from Wanda Jackson, BB King, Stan Getz and The Oscar Peterson Trio.

As well as our main Salisbury store we have a satellite outlet at Beulah’s Vintage Attic in Shipton Bellinger, Hampshire. 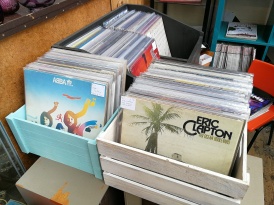 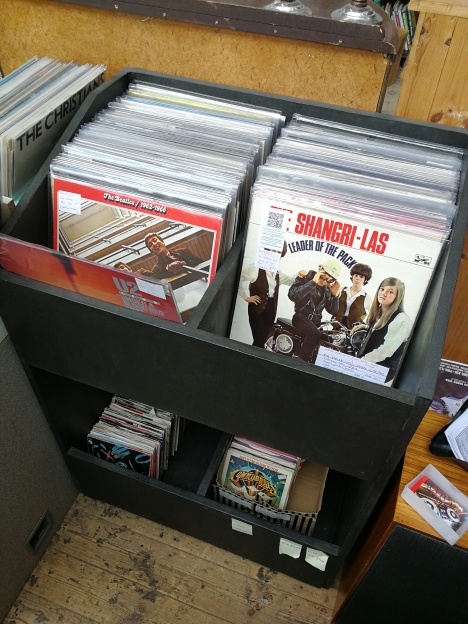 We have today totally refreshed the stock at this outlet and it carries an additional cross section of artists and genres of music to the same high quality as our main Salisbury store.

Beulah’s Vintage Attic is like a step back in time with lots of vintage and retro items for the home where our records sit nicely amongst it all.

There is also a great vintage cafe on the premises which serves hot and cold drinks and a selection of snacks and lovely homemade cakes. 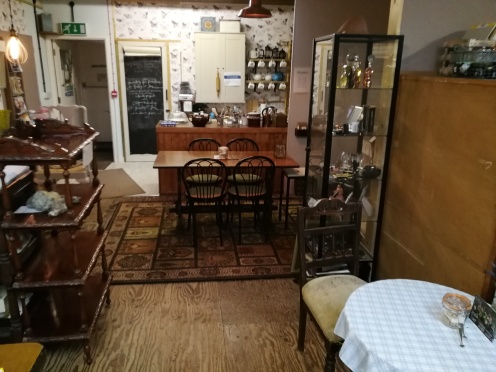 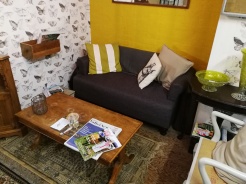 All in all a great place to stop and have a mooch and a pit stop just off the side of the A338.

You can find us at Beulah’s at the address below…..

We are above Toogood and May Auction Rooms

Opening Times there are…..