We are pleased to confirm that we will be the exclusive sellers in the Salisbury area for Chris Burns fine pencil art prints.

You can see a small selection of Chris’s work below. . 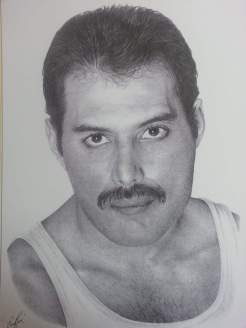 Each print will be hand signed by Chris and will be available as either framed or just as a take away print for you to get framed yourself.

Prints will be available in A4 and A3 sizes and prices will start at £ 9.99

These will make great gifts.

A little bit more about Chris whose art hangs on walls around the world.

He would draw in his spare time until in the late 1990’s when after seeing a number of artist producing and selling their own work on the streets of Europe and worldwide.

Having produced portraits and family pets for friends , neighbours etc he discovered that he thoroughly enjoyed producing these drawings and how good it would be to do it for a living.

It was then when he contacted various merchandising and licensing company’s with his drawings that he found himself producing film stars and football players for mass production that were then published throughout the UK in high street stores such as Clinton cards and various football clubs.

These drawings then went from strength to strength on various formats featuring on tv programs and trade magazines etc.

His pencil drawings are sketched entirely by hand, taking usually between two to three weeks to produce.
They are sold worldwide on prints and greeting cards to an ever growing public across Australia, the USA and Europe.

He has  focused his subjects on popular icons, legends and celebrities for a number of years now. Chris will also look at taking on commissions but with the quality of his work as you can imagine is booked up for a few years in advance.

Chris is also looking at  producing future works with exciting images of New York, Paris, Venice and the Human form with the  growing interest in his work he is  looking forward to these new challenges and bringing them to you wherever you are in the world.

We look forward to bringing  you Chris’s art to our gallery wall during July 2017.

We are a group of vinyl collector's and sellers with a permanent record fair style shop with quality vinyl, CD's, memorabilia & audio under one roof. Discover our limited edition records, pre-loved treasures and amazing condition vinyls in our shop in Salisbury. We also sell online worldwide. View more posts

One thought on “Fine pencil art by Chris Burns…….”